The Form of Champions

Get access to a database rich with records, background and history celebrating and honouring Australia's Greatest Races, Horses, Trainers and Jockeys. 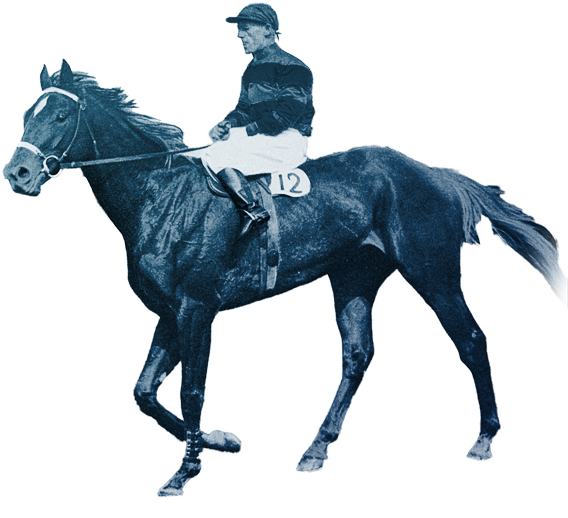 Providing a comprehensive vault of facts and statistics that consolidates as much detail on every Group One race currently conducted in Australia and our greatest jockeys and trainers.

You can also get a glimpse of the full database with the link below:

Taking selected Group One races in Australia and providing a variety of data-charts and information unique to the recent history of the race.

Through identifying trends and/or interpreting form-based data, the Fact Sheet endeavours to be a valuable resource to media and punters alike.

See what current Fact Sheets are available and scheduled releases with the link below:

A 30-year table supplies up to 10 individual panels of important information that can be studied and interpreted, providing invaluable insight into race trends and pointers.

The Charts then summarises a range of Race-Related Facts & Figures – effectively being a One-Stop Shop Resource for Key Race Info.

See current Race Charts are available and future scheduled releases with the link below:

Support us and our endeavours with a once off contribution

Test your knowledge with some trivia below

Did you know that a horse won two races on a Metropolitan programme on the same day - in consecutive races? 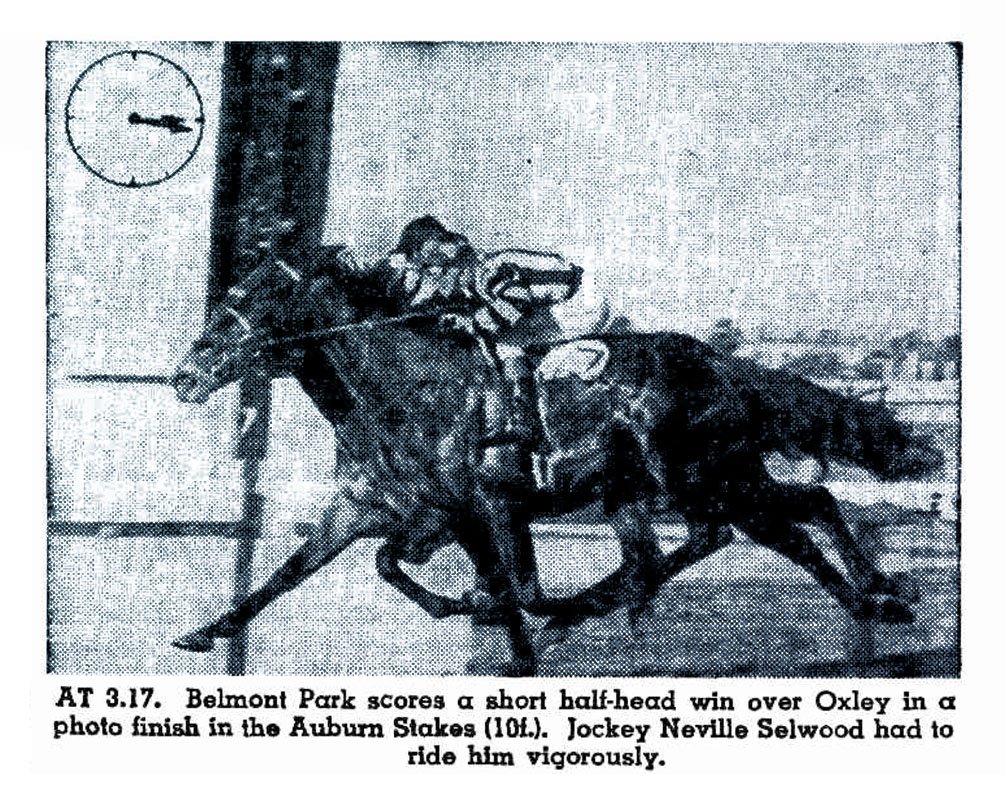 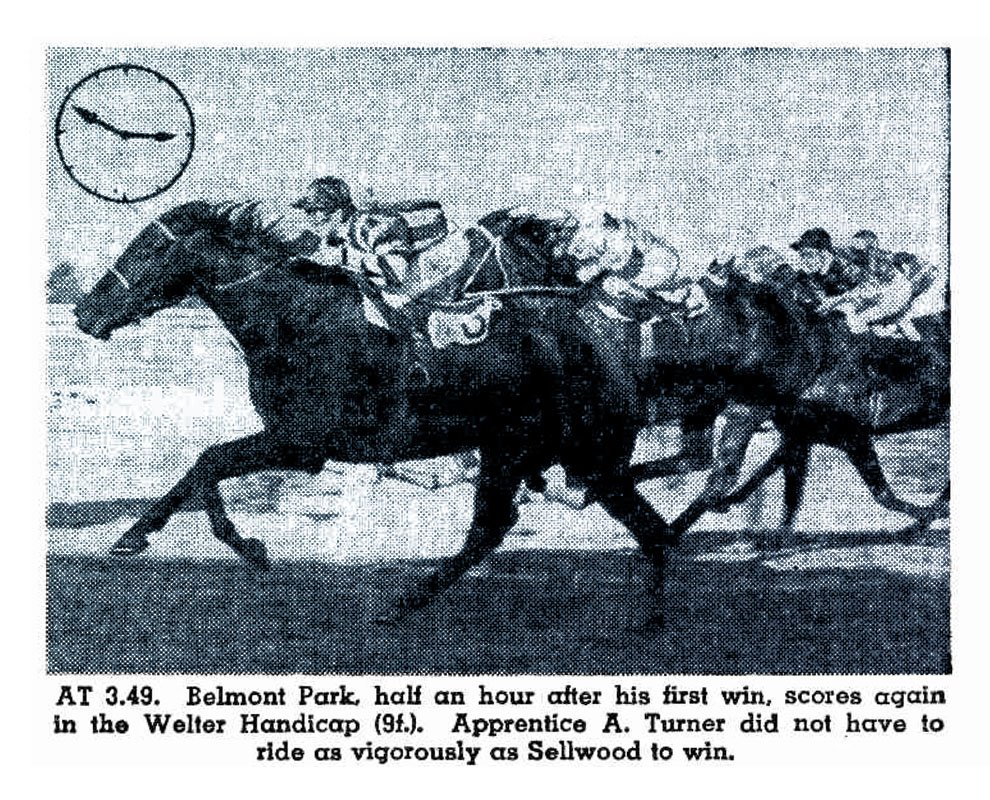 Unique happenings on racetracks occur (seemingly) quite frequently, but the story of BELMONT PARK, a 3yo trained by Maurice McCarten, does take some beating.

The horse was a dual acceptor in the following race, a 9 furlong Welter Handicap (at 3.45pm) with owner Mr Bill Dawes already having directed trainer McCarten to saddle the horse up in both races.

Dawes had apparently planned a betting coup based on the original advertised race programme - the Auburn was listed as Race 3, the Welter as Race 7 - but when acceptances were finalised, they were races 5 and 6.

Citing “stubbornness” as the reasoning behind his decision to back BELMONT PARK up in the Welter, Dawes had “one of the biggest wins of my life”, with Belmont Park starting at 7/1 in the second of his wins.

Footnote: Club vets had thoroughly inspected the horse after race 5, passing him fit and well to start in race 6. McCarten reported that BELMONT PARK ate his feed with relish that night, then settled down to a good sleep. By Delville Wood (sire of Hydrogen & Evening Peal), his mother was the McCarten-trained Sweet Chime - winner of the Thousand Guineas-Wakeful-VRC Oaks treble in 1946 & the 1947 AJC Oaks (then the Adrian Knox).

Did you know that a mare named CLOSE EMBRACE won a Melbourne Cup? 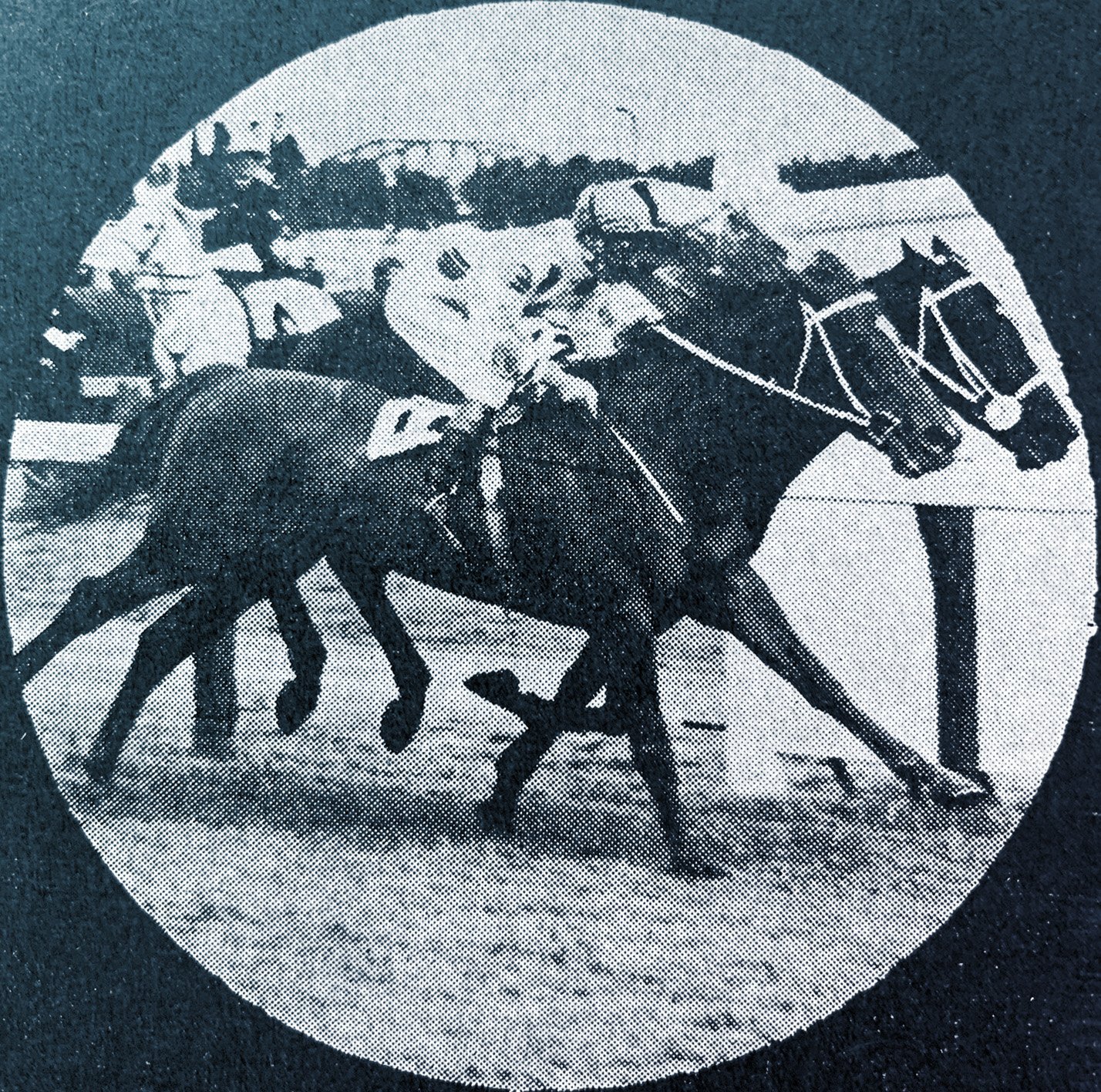 Here she is: LIGHT FINGERS (Roy Higgins) scoring by a pimple over stablemate ZIEMA in the 1965 Melbourne Cup, the first of 12 Melbourne Cups for Bart Cummings.

Registered as CLOSE EMBRACE by her NZ breeder Fred Dawson, the filly was leased to Mr Wally Broderick who had purchased her older brother THE DIP as a yearling.

By Le Filou from Cuddlesome, The Dip had won the 1962 Metropolitan Hcp & was second in the 1963 Sydney Cup.

Broderick, upon leasing Close Embrace, elected to change her name to LIGHT FINGERS - this was due to Le Filou (a French name) translating to “the thief” & THE DIP a “slang” word for pickpocket.

Did you know that it took 14 years for Sydney’s undisputed champion trainer TOMMY SMITH to win his first Golden Slipper? 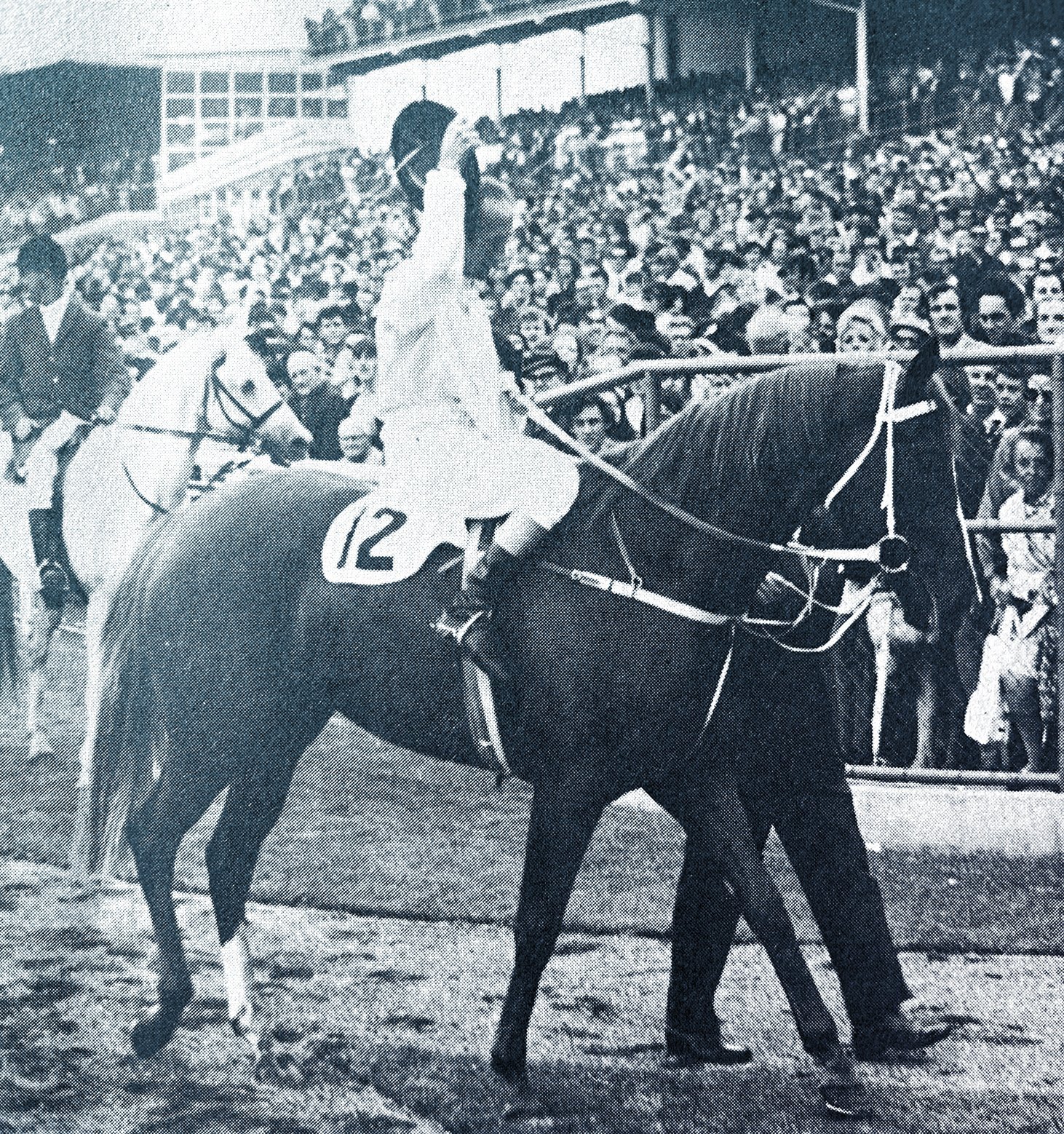 Sydney’s training ranks were being dominated by one man: T.J. (Tommy) SMITH - he’d won the NSW Metro Trainers Premiership the previous 4 seasons & would eventually string together an incredible 33 consecutive titles.

But the Slipper proved to be a nuisance to Smith in the early stages of its existence. After the 1970 Slipper, no less than 18 Smith 2yos had contested the Slipper for one second (Royal Show-1970) & two thirds (Flying Fable-1968, Very Merry-1966).

It took a Maiden filly called FAIRY WALK to break the drought & with George Moore on board, she scored a comfortable victory in 1971.

Smith then won the race a further 5 times (from John’s Hope-1972 to Star Watch-1988) creating the Race Record - which was then eclipsed by Smith’s daughter Gai Waterhouse when Farnan landed the 2020 Slipper.

Did you know that 2 Group One races were won by the one horse - on the same programme/day? 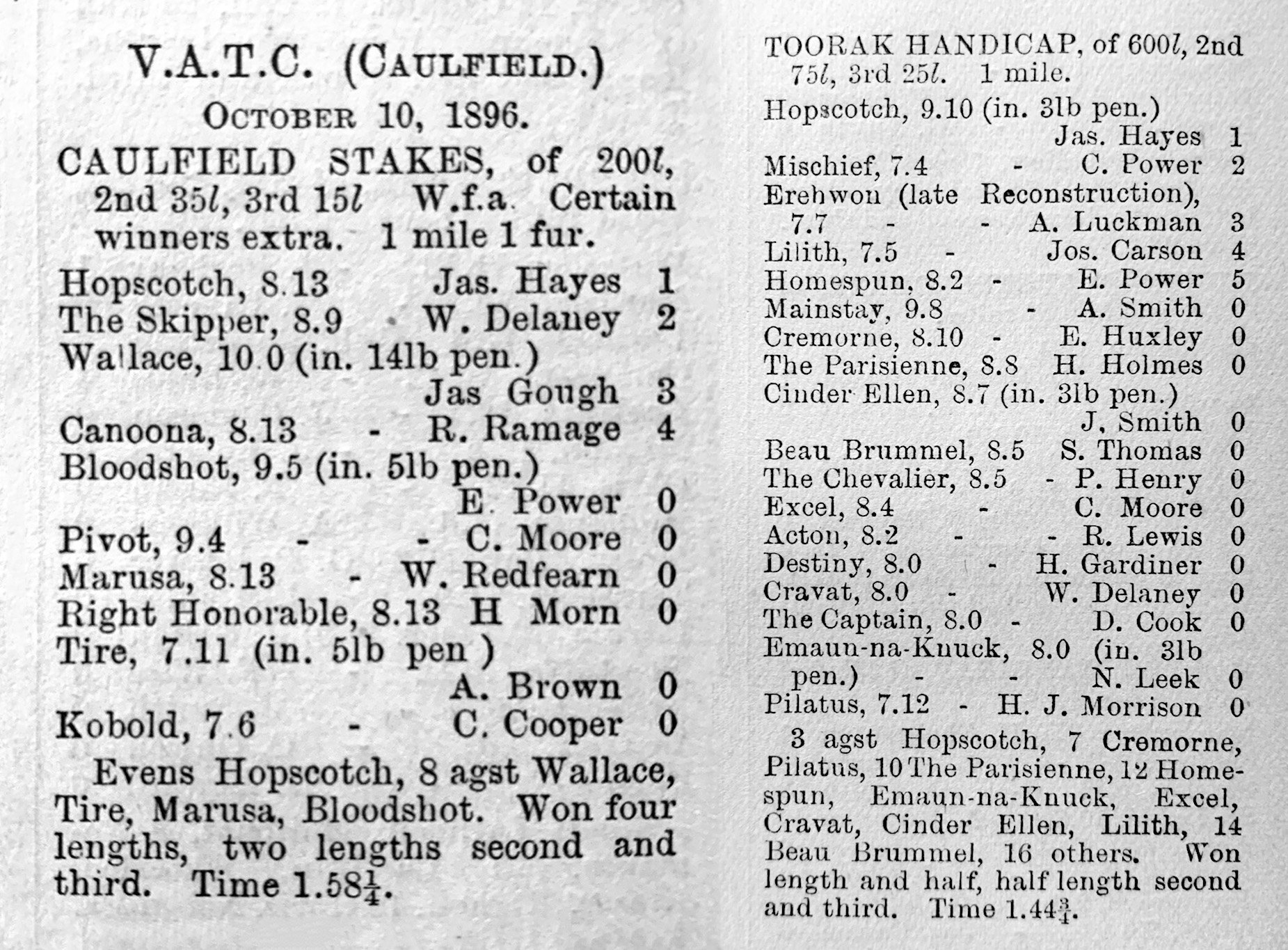 Race 1, the WFA Caulfield Stakes was won “in a procession” by the 1895 Epsom Hcp winner HOPSCOTCH.
Given a 2-3 hour “spell”, trainer Tom Brown found the valuable Toorak Handicap later in the day irresistible. Despite a 3lb penalty (taking his impost to 9.10), HOPSCOTCH “won in a common canter”, rider James Hayes doing all he could to “keep him back to the field”.

A week later, HOPSCOTCH went out the punter’s favourite at 5/1 in the Caulfield Cup but found the 12 furlongs too far.

Look back at previous Did You Know's here:

Did You Know Archive